Andy Rooney says “Stop using me for your political B.S.”

Yesterday a friend on Facebook shared a September 9th, 2019 post that had gone thoroughly viral, being shared thousands of times. It read as follows:

Everyone needs to read this.

CBS and Katie Couric must be in a panic and rushing to reassure everyone that this is not network policy — re Andy Rooney’s commentary on prayer. Folks, this is the year that we RE-TAKE AMERICA!

Andy Rooney and his prayer:

I don’t believe in Santa Claus, but I’m not going to sue somebody for singing a Ho-Ho-Ho song in December. I don’t agree with Darwin, but I didn’t go out and hire a lawyer when my high school teacher taught his Theory of Evolution.

Life, liberty or your pursuit of happiness will not be endangered because someone says a 30-second prayer before a football game. So what’s the big deal? It’s not like somebody is up there reading the entire Book of Acts. They’re just talking to a God they believe in and asking Him to grant safety to the players on the field and the fans going home from the game.

“But it’s a Christian prayer” some will argue.

Yes, and this is the United States of America, founded on Christian principles. According to our very own phone book, Christian churches outnumber all others better than 200-to-1. So what would you expect — somebody chanting Hare Krishna?

If I went to a football game in Jerusalem, I would expect to hear a Jewish prayer.

If I went to a soccer game in Baghdad, I would expect to hear a Muslim prayer.

If I went to a ping pong match in China, I would expect to hear someone pray to Buddha.

And I wouldn’t be offended. It wouldn’t bother me one bit.

“But what about the atheists?” is another argument. What about them? Nobody is asking them to be baptized.

We’re not going to pass the collection plate. Just humor us for 30 seconds. If that’s asking too much, bring a Walkman or a pair of earplugs. Go to the bathroom. Visit the concession stand. Call your lawyer!

Unfortunately, one or two will make that call. One or two will tell thousands what they can and cannot do. I don’t think a short prayer at a football game is going to shake the world’s foundations.

Christians are just sick and tired of turning the other cheek while our courts strip us of all our rights. Our parents and grandparents taught us to pray before eating, to pray before we go to sleep. Our Bible tells us to pray without ceasing. Now a handful of people and their lawyers are telling us to cease praying.

God, help us. And if that last sentence offends you, well, just sue me.

That is your right, and we will honor your right. But by golly you are no longer going to take our rights away! We are fighting back and we WILL WIN!

God bless us one and all…God bless America! Despite all our faults we are still the greatest nation of all. God bless our service men who are fighting to protect our right to pray and worship God.

Let’s make 2019/2020 the year the silent majority is heard, and we put God back as the foundation of our families and institutions and our military forces come home from all the wars.

That seemed — extremely fishy. Especially as Rooney died in 2011, and therefore was unlikely to speak about the “silent majority” winning in 2019/2020.

So I went looking. Took me all of fifteen seconds of Snopesing to find out that, indeed, this post was false. Andy Rooney said nothing of the sort. Neither did Paul Harvey, the other person to whom it has apparently been misattributed.

Instead, it was written in 1999 by Nick Gholson, a sports writer for the Times Record News in Wichita Falls, Texas. Moreover, a lot of what he said was cut because it doesn’t fit the intended message of this. He was making a point about having a sense of humor. The original piece started thus:

Some atheist goes to a high school football game, hears a kid say a short prayer before the game and gets offended. So he hires a lawyer and goes to court and asks somebody to pay him a whole bunch of money for all the damage done to him.

You would have thought the kid kicked him in the crotch.

Damaged for life by a 30-second prayer? Am I missing something here?

I don’t believe in Santa Claus…

And he went on to say this:

I don’t think a short prayer at a football game is going to shake the world’s foundations. Nor do I believe that not praying will result in more serious injuries on the field or more fatal car crashes after the game.

In fact, I’m not so sure God would even be at all these games if he didn’t have to be. That’s just one of the down sides of omnipresence. Do you think God Almighty himself would have watched Spearman beat Panhandle 50–0 Friday night if he didn’t have to?

If God really liked sports, the Russians would never have won a single gold medal, New York would never play in a World Series and Deion’s toe would be healed by now.

Far more irreverent than the “Rooney” version, basically telling everyone to lighten up — Christians included.

What really bothered me was that the part starting with “The silent majority” is completely fabricated. Someone took an essay by one person, edited it to make it seem more pro-religion, misattributed it to someone else, and added a whole section that mischaracterizes the intent of the original piece!

Now this could be like a big game of telephone, one of those stories that gets passed around and the facts get muddied. Except that the facts are so easy to find. If Rooney had said this, why not just share the video? If Harvey had said it, why not share the audio? No, someone went out of their way to craft this, putting words into the mouth of a beloved and trusted 60 Minutes icon.

I pointed all this out to my Facebook friend. Her response: “You know it is a good message just the same.”
That got me. She and I went to the same high school, I know she was taught the importance of intellectual honesty, of primary sources and misattribution. Moreover it seemed so very blasé. “Sure, I know it’s fake, but I like the message, so I don’t care.”

I don’t know that, actually. A prayer before a game is innocuous, sure. But now schools are putting up “In God We Trust” signs. We’re supposed to stand against theocracies — that’s why Sharia Law was such a rallying cry.

And America was not founded as a Christian nation. Thomas Jefferson was a Diest. The Declaration Of Independence and the Constitution were based on Locke and Rousseau, not the Bible. The Treaty of Tripoli explicitly states that the US was not founded to be Christian.

But more than that, the person who put this together did three deceitful things — one, misattributed the quote to someone more famous than the author, to make it seem to carry more weight; two, edited the original post’s comment about God not caring about sports at all, or else why did Russia win so many Olympic Games; and three, tacked on a completely false addition that gives a different political tone to the whole piece, contrary to the original author’s intent.

If a person believes in the message, they could share it as written, or else write their own. Misrepresenting it and altering it to suit their own beliefs undermines the message. No one should be tricked into a belief system. Is faith based on deception actually faith?

And note — the post begins by slamming Katie Couric and CBS, a political jab that doesn’t work unless the misattribution to Rooney stands.

“This is the year we take re-take America” is a terrifying statement. It’s being echoed by mass shooters across the country, by people who conflate Christianity and White Nationalism, by people who support putting kids in cages because of the color of their skin.

Posts like this scare the hell out of me. Deliberate deceptions to further a sense of oppression among a group who aren’t marginalized or discriminated against in order to stoke resentment and anger.

So — no discussion or rebuttal. No attempt to debate. She shared an untrue thing, got called on it, and instead of thinking about it, she removed the person who pointed out the problem.

That’s her right, and I will honor her right. But, by golly, it’s also wrong.

Or, as Andy Rooney actually said, “People will generally accept facts as truth only if the facts agree with what they already believe.” 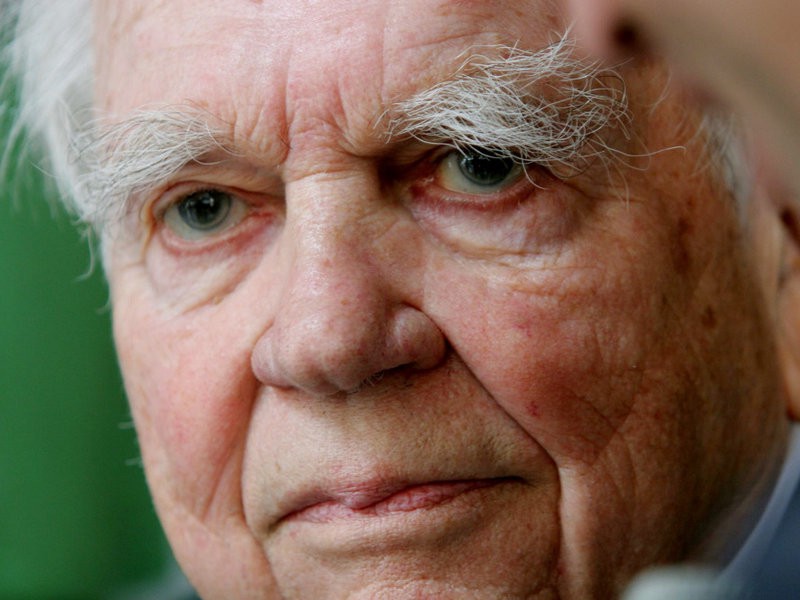