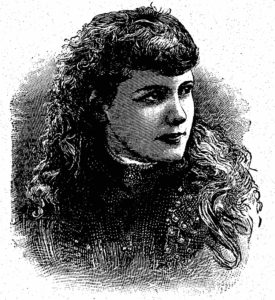 It was the first day of December, 2019, and like Alice, I was down a rabbit hole.

I was working on a short-story follow-up to What Girls Are Good For, my 2018 novel following the early career of groundbreaking undercover reporter Nellie Bly. My new story took place immediately after the exposé that made Bly a household name, her ten days spent as an inmate in the insane asylum on Blackwell’s Island.

That experience had been turned into a book, Ten Days In A Mad-House, a terrific and horrifying read that remains hugely influential to this day (the nurses she describes were evidently the basis for Nurse Ratched in Ken Kesey’s One Flew Over The Cuckoo’s Nest). In order to catch up my readers on where the events of the story fell, I wanted to kick off with Bly receiving an offer from a publisher for that very book.

Trouble was, I had no idea how much money she was offered.

Fortunately, I knew the name of the original publisher, as well as the date of publication. But lacking a Publisher’s Weekly to report book deals in 1887, I started following the paper trail of the publisher himself. I thought I might find a contract with another author, or some perhaps some old balance sheets.

Instead I found something unexpected.

The lost novels of Nellie Bly.

Bly had spent the three years after her cannon-blast debut in the pages of the New York World trying to top herself. She’d exposed the ‘King of the Lobby’ in Albany, outed a serial procurer of girls in Central Park, and interviewed the most notorious would-be murderess of the day (all these stories and more are collected in Nellie Bly’s World, Volumes 1 and 2). She kept putting herself in ever greater peril in order to get a story. Why? Because the titillation of ‘a girl in danger’ sold papers — especially during the height of Ripper hysteria in London.

She reached the zenith of her fame by racing around the world in an attempt to best the fictional record of Jules Verne’s character Phileas Fogg from Around The World In Eighty Days. She even got to meet Verne during her trip.

Bly was not alone in the phenomenon of “stunt girls,” but thanks to that three-month race around the globe, she was by far the most famous. There were board games and trading cards based on her journey. Her face was known everywhere, and her ulster coat and cap were iconic. After Queen Victoria, she was arguably the most famous woman in the world.

But for Bly, stunt reporting had taken a toll. She’d begun to suffer terrible headaches. Stories that once would have fired her heart now left her cold. Celebrated and famous after her seventy-two day girdling of the globe, she felt she had reached the peak of what newspaper reporting could offer her.

So when Norman Munro offered Bly a job writing for the New York Family Story Paper, she leapt at it. It’s easy to understand why. Munro was offering her $40,000 over three years. Even for a star reporter, the most she could have been earning at the World was $5,000 a year. Munro’s offer must have seemed a fortune.

For More Information About The Lost Novels Of Nellie Bly, Sign Up For David’s Newsletter And Receive A Free Novelette! Click Here!