New York World – Sunday, March 11, 1888
Nellie Bly Takes a Hand at Foils and Likes the Exercise
It Looks Very Easy, But Isn’t—Women Cleverer Than Men Are—Anybody Can Learn to be Graceful at It—How Members of the Fencers’ Club Dress—Teachers Say That the Practice Is Growing in Favor.

I have been learning to fence. It is quite the proper thing nowadays for women to learn how to handle the foils. The craze is not as new, however, as one would imagine. Long ago, twenty or twenty-five years, when Prof. Gebhard opened a gymnasium, he began to teach women to fence. He was the first to introduce it as an art or exercise for women in New York. Laura Keene, an actress, was his first lady pupil, and she became quite skillful with the foils. At first actresses only came to him, but the following summer Prof. Gebhard went to New York, where he formed a class made up entirely of society women who knew and appreciated the advantages of healthful amusement. The other day I applied and was accepted as a pupil of Prof. Gebhard. He has a class composed of some twenty young women and a second class of a smaller number, besides private pupils. The class wears gymnasium dresses, short skirts, loose waist and fencing shoes. They say women learn much quicker than men and enjoy the sport.

“This is a foil,” said Prof. Gebhard at the beginning of my first lesson. “You must always keep the broad side up, and remember the point is what you want to strike your adversary with. Now take first position.” He placed me facing him with my heels tight together. 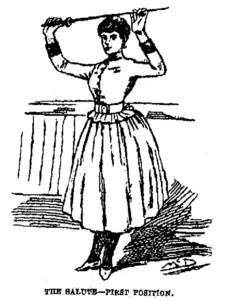 “Now salute, putting the foil perpendicularly before your face, then transfer it to the left hand and hold it easily by the side. When I say ‘First position,’ you catch the foil firmly by the right hand, sliding the left half way along the foil and so raise it above the head, bending the knees at the same time.”

It seemed very easy to do by watching him, but it was not so easy as it looked.

“When I call ‘On guard,’” continued the Professor after I had done the first task to his satisfaction, “you loosen the left hand, still retaining the curved position, while with the right you aim the foil at me, at the same time stepping forward with the right foot. Do not move the left. On guard!”

I did what he told me, but my movements must have been exceedingly stiff and ungraceful. He looked at me in some alarm as he called:

“Bend the knees. Keep a good balance on the left foot so you can go back to the other position as soon as I say.” Again and again it was repeated, much to my enjoyment.

“You must keep the hand firmly clasped around the hilt, else the one you fight with will disarm you. Always keep the back of the hand down, the nails up.”

“Do you have much trouble teaching girls?” I asked, as I stopped to find out where my breath was.

“No, they learn very easily. I consider fencing the very best exercise, for it puts every muscle in motion. Now your next move is to ‘strike out,’ holding the arm straight, pointing the foil at my breast, and as you do this you must straighten the left arm. On guard, strike out!”

I “strike out,” and almost lose my balance, and while fearing every moment I shall topple over, I try to retain the position.

“You did not balance well on your left foot,” he explained. “Now your next move is to step out the right foot, and at the same moment strike me with the point of your foil. Now, on guard, strike out, attack. You would never kill your enemy if you struck him in that way.”

I think I made a sorry-looking fighter—or rather fencer. I felt much in my own way—as if I was stumbling over myself.

“You must never have a front position,” he explained. “Always present a side view, excepting the face. Leave an ample distance between the feet and balance firmly on the left, so at the call you may be able to resume your first position.”

For one hour I practised those simple exercises that were difficult to learn. I found as they grew easier I grew more anxious to be able to strike him. I just wanted to learn to fence, so I could strike him once and surprise him. I did not accomplish my desire the first day.

“I thought you would be so stiff from the exercise that you would not come again,” said the Professor, when I next reported for instructions. Again I was drilled through the first lesson, and then I was taught to advance and retreat.

“Now I am your enemy; I retreat while you advance, stepping the right foot forward and bringing up the left, always keeping them in the same position.”

He retreated and I advanced. I had determined that I was going to strike him, and I smiled as he watched me entirely ignorant of my wicked designs. I made him retreat clear back against the wall of the gymnasium, and he looked at me in a surprised way, but I did not accomplish my object. He must have thought that I had an unusual amount of energy for a new pupil. A quick and double-quick step was taught me before this lesson was finished. I was afterwards taught to attack on the inside and the outside of the foil, up and down, and an above and under movement. The more I learned the more interested I became, until it was with regret I resigned my place as a pupil.

I then went to Prof. Berger, who has a system of fencing which he says is wholly his own. He is a pleasant little man with a shock of white hair and the biggest of blue eyes. Fencing is to him a grace. He glories in the movement and positions of grace which must be assumed as a ballet-master would delight in a graceful pupil or an artist in a model.

“You see on the board? First position, second position, on guard and a fond. Now first position: put your left heel against your right ankle, hold the foil in your right hand gracefully in front of you; move it easily to the left hand, by which you catch it half way between and then raise it by both hands above the head. Make a circle or frame of your arms and foil for the face. That looks lovely! This is second position. Loosen the left hand and while keeping that arm still in the curved position bring the foil down with the right hand, pointing it directly to my eye. That is ‘on guard.’ Now you strike out by straightening the arm at the wrist, and that is ‘a fond.’ Is not that easy and graceful?”

Somehow it did seem easier than the other lessons. “Do you have many pupils?” I asked the little Professor, as I rested my foil on the toe of my boot. It was information, not lessons, I wanted.

“Yes, a great number. Every day I get inquiries about fencing lessons. It is so pleasant and pretty; it gives ladies rosy cheeks, straight shoulders and graceful carriage of the head.”

“Who is the best fencer you have among the women?” I asked, regardless of instructions.

“Miss Hilliard,” he replied, “sister of the actor, Robert Hilliard.”

Capt. Nicolas, of the Fencers’ Club on Twenty-fourth Street, regards fencing in a very scientific light. It seems very easy to learn by his instructions. During the course of a lesson I asked him what he thought of fencing as an exercise for women.

“There is none better,” was his emphatic reply, “Fencing, to be done properly, requires the exercise of every muscle and instinct. It trains the mind in speediness of thought, the eye in quickness of sight, the body in quickness of movement, the instinct in quickness at conclusions.” 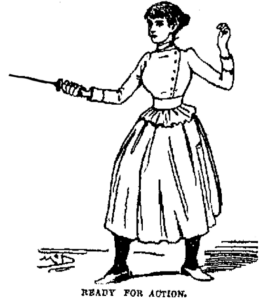 There are a great number of women at the present time engaged in learning the art of fencing. The Fencers’ Club, which is in the same house as the Authors’ Club, is composed of nineteen ladies. Admission is procured by sending a letter to Mr. J. Murray Mitchell or Mr. Charles De Kay. The club-rooms are devoted exclusively to the women’s class three days in the week, from 10 a.m. to 2 p.m. Pretty and appropriate costumes are worn by the class to allow perfect freedom of movement.

One of Prof. Gebhard’s classes is composed of Miss Billings, Miss Pagot, Miss Vandervoort and their friends.

Prof. M. Senac has a class composed of the members of the Conservatory of Music on Seventeenth street. In private he has Miss Rose Coghlan and Mrs. Langtry as pupils. He says they are quite handy with the foils. Miss Pauline Hall is practising under the care of M. Louis Trouchet.

GET THIS AND OTHER NELLIE BLY ARTICLES, COLLECTED TOGETHER FOR THE FIRST TIME!
NELLIE BLY’S WORLD, Volumes 1 and 2 are available here! 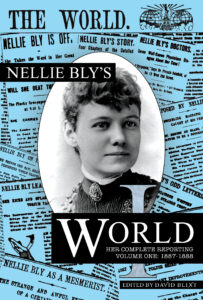