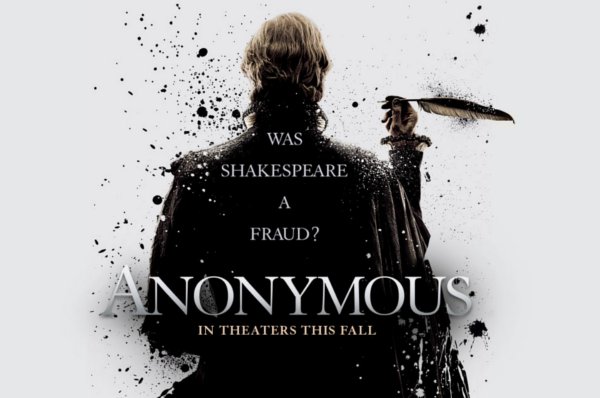 I don’t have much time for this, but with the movie opening today I feel the need to dive in to the ANONYMOUS business, if briefly. Let me say at the outset that I have enjoyed Roland Emmerich’s early films, though I haven’t seen any of his recent ones. And there are many, many wonderfully talented actors who appear in the film, putting in ferociously nuanced performances.

But the premise is bunk.

First, let’s all agree the important thing is that these plays exist at all. The character and life history of the author is interesting, but not relevant to the work. We don’t know anything of Homer but for his writing, nor even the name of the author of Beowulf. It’s the work that matters.

However, since we have more information on the Renaissance than we do from ancient Greece or the Middle Ages, we have just enough pieces and clues to cast doubt on the facts, and lack enough facts to obliterate the doubts.

200 years ago, with the rise of Bardolotry and the Romantic poets, it became fashionable to guess who “really” wrote Shakespeare’s plays. Today it’s a cottage industry, culminating in this film. What I find interesting, though, is that the conspiracy theorists always choose somebody that’s already famous – it’s never a misunderstood genius with syphillus hiding in a brothel. Just like people who talk about reincarnation were always princesses or great men, never three-dollar hookers or cruel slave-drivers. And invariably the candidates are from the nobility. Sir Francis Bacon. The Earl of Oxford. Even Elizabeth herself!

Why? Here’s a relevant quote from the NYTimes review of the film:

“No argument could ever possibly sway the Oxfordian crowd. They are the prophets of truthiness. “It couldn’t have been Shakespeare,” they say. “How could a semiliterate country boy have composed works of such power?” Their snobbery is the surest sign of their ignorance. Many of the greatest English writers emerged from the middle or lower classes. Dickens worked in a shoe-polish factory as a child. Keats was attacked for belonging to the ‘cockney school.'”

This is what I most object to in the anti-Stratfordian argument. It’s all based on classism. It’s like 200 years from now somebody saying “Four poor lads from Liverpool couldn’t have composed all that music. It had to be someone with conservatory training! They must have been a front!”

Yes, we don’t have the plays in Shakespeare’s own hand. Nor do we have a copy of Dante’s Inferno in his. Yes, Shakespeare’s father was a glover. But he had applied for a coat-of-arms, hardly the pretension of an ignorant nobody. And while we have no written evidence of Shakespeare’s creative process, we have plenty of testimonials of people who saw his plays and talked about him. Ben Johnson is featured in the film as being part of the conspiracy. But that’s a convenient way to get around the fact that Johnson wrote about Shakespeare himself! Like all conspiracy theories, it takes an unbelievable number of people working in concert to hide something so utterly mundane and ridiculous. You know how we know that Oxford wasn’t hiding his identity in order to publish his writing? Because he published his own writing openly!!

The film is, sadly, nonsense. MIDSUMMER wasn’t written before the form was created, R&J was hardly the first play in verse, and Marlowe couldn’t have been part of the plot in 1598 as he was stabbed to death several years earlier. Of course, none of these facts would have bothered Shakespeare himself, who paid no attention to history when he was out to tell a good story. Alas, the film’s story is rather, shall we say, lacking.

We can all agree that, whoever wrote Shakespeare’s plays, he was a genius. So why oh why is it so difficult to imagine that the genius rose from Stratford, not London? Why create elaborate birther-esque conspiracies? Is it a longing for elitism? A need to bring an “upstart crow” back to earth? I genuinely don’t understand.

Here are some links to different reviews. Enjoy.

Let me sum up by quoting my wife: “The world is round, climate change is real, evolution happens, and Shakespeare wrote his plays.”